My Life as a Fort Mac Evacuee : After the Evacuation

When I left off our story yesterday we had just arrived safe and sound in Edmonton.

But before we were in Edmonton we spent a couple days at the Wapasu Creek Lodge oilsands camp. 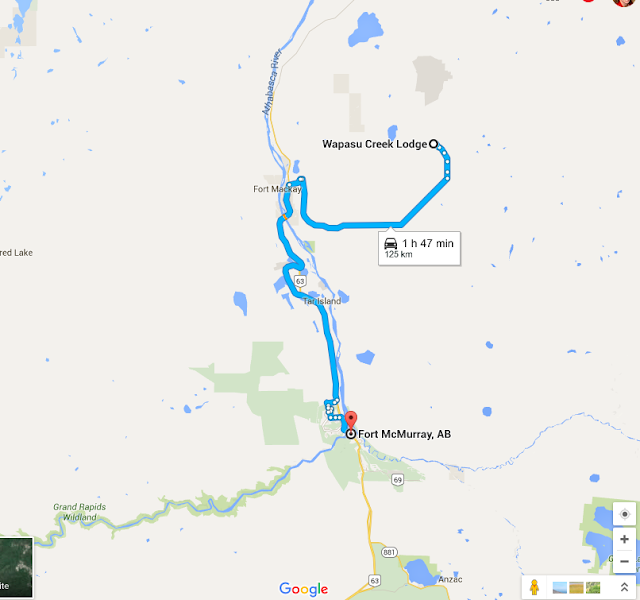 You'll notice that Google maps suggests it should take a little less than 2 hours to get to the camp. It took us 12 hours because of the insane traffic.

I can't fully express just how wonderful the camps were to the evacuees. The workers were welcoming and so very gracious to us.

It was 4am when we arrived and we were greeted by incredibly kind oil sands workers who gave us a place to stay.


The camp was set up sort of dorm-room style with each room having a single bed, a desk, a dresser, a TV, a closet and a sink. There was a shared bathroom in between two rooms. Since there are 5 of us they gave us 4 rooms. Each of my sons had their own room, Doug had his own room, and Olivia and I (and Shadow the cat) shared a room.

We had basically nothing with us but the lovely lady at the front desk gave us some soap and we were able to buy toothbrushes at the camp shop.

We gathered up gravel from the parking lot and stuck it in a make-shift litter box for Shadow and brought him some people food to eat (which he hated of course).

Shadow was very not impressed with the lack of cat-specific food but he survived.

There was no internet in the rooms so we were very thankful for the TVs so the kids had something to keep them occupied. I think they went through serious internet withdrawal during the days we were there!

The camp provided us with bedding and free meals so we had everything we needed.

The meals were served cafeteria style and were very tasty. The kitchen workers were a delightful bunch of people - so accommodating and friendly.

As great as the camp was there was a lot we couldn't get simply because of its location. There are only so many days you can go without a hair brush and clean underwear before everyone starts getting grumpy.

We were so very thankful that the camp offered free flights south and we took advantage of a flight to Edmonton as soon as we could.

The airline graciously allowed us all to take our pets on the plane - inside the cabin - with us since most of us didn't have pet carriers with us.

Shadow basically hated the flight and he was especially unimpressed with the large dogs all over the place but he huddled down in my computer bag and sat on my lap without too much complaint.

The kids were absolutely thrilled to be on a plane for the first time that any of them remembered. The boys had been on a flight when they were babies but Olivia had never flown before. They were very enthusiastic about the whole experience.


When we arrived in Edmonton we were greeted by a line up of people giving out food and supplies and I was so very excited to get a hairbrush, deodorant and cat food!

We spent the weekend with my wonderful cousin and his family  - they fed us and took care of us and made life feel ok again.  A blogger friend of mine came and took Shadow to her home to cat-sit for us and she brought some donations to us as well. So thankful.

After that we moved in to a "vacation" home with my best friend and her family (also from Fort McMurray). We visited the donations sites and got a lot of food and toiletries and some clothes. We shopped for what we couldn't get. And after a few days we started to feel a bit more settled.

Our rental here runs out at the end of May and then we will move on to another rental place for the month of June. We will continue to find rental places until we can go home. We have no idea when that will be of course.

The kids are ok - it is a very emotional experience all around and when you have special needs kids it makes for some interesting days. The adults are doing as well as can be expected amidst the chaos.

I am incredibly thankful that we are living with my best friend and her family - it is much needed support in a very stressful time.

We are so very grateful for all the support we've received from our friends and family and even perfect strangers. This situation could have been so much worse and everyone has worked so hard to make it as easy as possible.

Now all we need is for the fire to stop. That would really help a lot.