Our Pet Has Gone Missing :(

Our cat has gone missing. 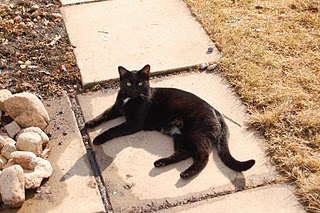 I realize many people are not "cat people" but we love our cat. His name is Shadow and he is a delightfully mellow man-cat. He is not snobby and he drools when he purrs... which is really gross actually. He is also a little clumsy sometimes. He is perfect for our crazy house.

During our bout of not-having-a-home this summer Shadow stayed with my mom. She took great care of him and he gained a few pounds. He also managed to hurt his paw somehow a couple weeks ago.

He is happily an outdoor cat and spends his nights hunting mice or whatever outside so we were not surprised that he hurt himself.

We were surprised though when he stopped putting any pressure at all on his paw and just hopped around on 3 legs.

They think he might have an abscess working its way out (an infection). They said it is fairly common in outdoor cats and not to be too worried because he was otherwise the picture of health.

Saturday afternoon he hobbled outside and here we are Sunday night and he hasn't come home!!

I hope he hasn't been eaten by a bear or wolf (legitimate possibility here) or run over by a truck (we live  on a busy road). I hope he didn't hurt himself more and is unable to get home.

I want Shadow to come home.

And even those of you who hate cats have to see the ridiculousness of a cat disappearing right after we spent almost $300 to make sure he was ok. Sigh.

My kids are sad too. They love Shadow. 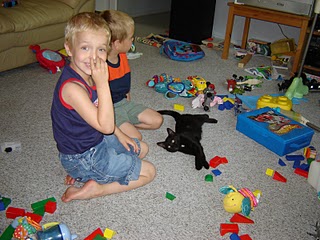 He was so cute and little. He is now a big man-cat but still cute.