Why You Should NEVER Buy ANYTHING From the Brick... Customer Service #FAIL

*Please note that just after I wrote this post I was contacted by The Brick customer service so they could make it right. You can read about that HERE.*

A couple months after Olivia was born we purchased our very first sofa set. We didn't have a lot of money so we went to The Brick store in Prince Albert, Saskatchewan which was just over an hour away from where we lived.

They had a "manager's special" going on where we could get a couch, loveseat and chair for about $1200. We had saved our income tax return for the purchase and were very excited to get our very first set of matching furniture.


Now at this point you can blame our naivete for even remotely believing the guy. Clearly he was lying his patootie off to get a sale. But we were excited to have matching furniture and he convinced us. We spent the extra HUNDREDS of dollars for the 5 year extended warranty.

We were very excited! This is what it looked like when we first got it... 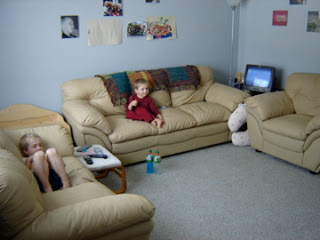 (look how young my boys were!)

About 5 months later we noticed that the couch was discoloured in really odd ways- it would be a different colour on one side of a seam than it was on the other side. Just weird. We called The Brick. We sent them pictures and they agreed that the set was faulty and replaced it with a brand new set. We were thrilled. Yay! The extended warranty paid off!

But we still hoped for the sofa set to last us for awhile. In our world $1200 is big bucks.

Unfortunately the sofa set did the same stupid discolouring thing less than a year later but we decided there was clearly no point in getting it replaced since it was obviously just the way the set was.

As of today we have had the sofa set for 4 years and 2 months and it really has been nothing but a headache for us.

In January 2009 we started noticing more and more and more problems with the set. I called The Brick and told them what was going on and they told me I could bring the set in and LEAVE it with them for "several weeks" while they assessed whether or not they would fix it. Never mind the fact that I had 3 young children and no other furniture ... we were moving in less than a month and so I declined and said I would contact them from our new location.

By January 2010 I had attempted to contact The Brick more times than I can count and was always given the runaround. At this point the sofa was in really bad shape.

The seams of the sofa were coming apart. Every. Single. Seam. 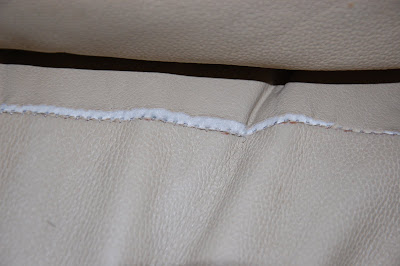 The leather was cracking horribly in between every cushion... 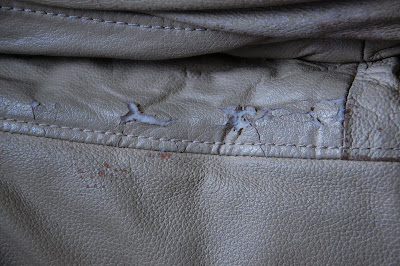 and the leather was just looking really nasty in a lot of places... 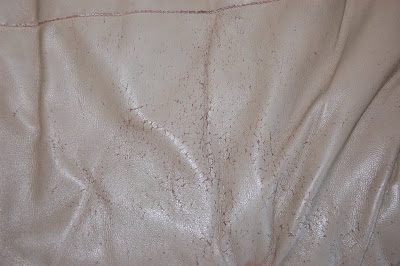 We realize some of this is normal wear and tear... but EVERY SINGLE SEAM coming apart? That is just ridiculous. Poor quality.

Finally I resorted to emailing all the contacts they had listed on The Brick Canada website.

I received a rather rude email back from the customer service lady saying that the last they had heard from me was before we moved. Apparently no one had given her the dozens of phone messages I had left over the past year.

I mentioned that I had phoned several times but thanked her for replying to my email and told her the problems we were having.

She had me email her pictures.

Then she referred us to someone else.

Who ignored us. For months. We sent a lot of emails. We called a lot of times. We were told many times someone would get back to us. They never did.

So a few more months go by.

By this time I am beyond frustrated and I hand the whole thing over to my husband. I figure someone might listen more to a man. Say what you will but you know that it is true. Uncool. But true.

He does get a response and is told they have no pictures. He sends them again. Then they ignore us some more.

Finally someone tells us that the person we were talking to has actually been away (on maternity leave or something) and can we send the pictures again.

This was last week.

They got back to us today with an answer.

And guess what it was?


Doug,
After your photos of your set have been reviewed by both Winnipeg and Prince Albert, it has been decided that warranty work will not be possible as it appears that the damage is by customer neglect.
I apologize for the delay in this decision.

Doug replied asking what neglect we could do that would cause all the seams to come apart. Wonder what they will respond with?

I am so sick of it. Terrible horrible horrendously awful customer service.

I am not an idiot. I know a $1200 sofa set is no big deal to a lot of people but it was a huge investment for us. We have been nothing but polite up until this point but this last brush off is just beyond infuriating.

Moral of the story?


Don't shop at The Brick and definitely do NOT purchase the extended warranty since they clearly will not honour it.