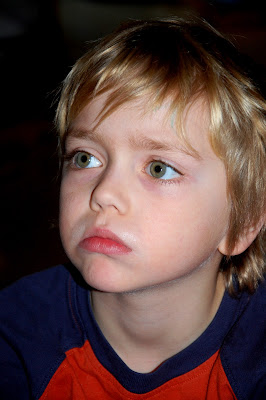 As I've mentioned before Owen has had trouble in school this year- more than any year so far. He has always shown some ADHD tendencies... which isn't surprising considering it is largely genetic and his dad and older brother both have it too. We have never felt too compelled to get an actual "diagnosis" since Owen has mostly been able to function just fine.

We are not in to diagnosing a kid or medicating a kid for no reason.

That being said we are also not into letting a kid suffer needlessly. So when Owen started having more and more difficulties in school we figured we better look in to a few things just to be sure.

This past week we met with a psychiatrist and it was a really good meeting. We live a zillion miles away from the nearest psychiatrist so we actually met with him via a skype sort of thing. Owen thought we were talking to someone on TV :) .  We also had Owen's counsellor in with us.

Basically the psychiatrist said that ya, Owen has ADHD in some measure but at this point he doesn't want to label him officially because he doesn't think he needs medication.

We totally agree and it was really nice to have that confirmed by a professional.

The psychiatrist was the same one who saw us with Aiden before Christmas and he had piles of reports on us and Owen and it was almost eerie talking to someone who knew so much about us already!

He basically summed up how Owen is a pretty good mixture of Doug and I... he got Doug's ADD and my anxiety issues. Lucky kid. :P

He didn't really tell us anything we didn't know already except for one major thing- we have always questioned whether Owen's "issues" are his own or whether they are, in some way, a response to having an older brother with Autism and a family like ours. The psychiatrist said that it was very clear to him that Owen's "issues" are in his genetic make-up and that he would have been this way no matter who his siblings were. Obviously our family has shaped him in many ways but the basics are there no matter what.

This was really encouraging to me and it means we can stop assuming some of his behaviour is "learned behaviour" and just accept that it is part of him and parent accordingly.

Owen is incredibly sensitive and easily overwhelmed... just like his mother. Poor kid. This wasn't new information but the psychiatrist emphasized that he CAN'T just "suck it up" so to speak. At this point he really is not able to! He responds to negative reinforcement ( aka " if you don't clean your room right now I will take away all the toys left on the floor" ) extremely poorly. His brain tells him he can't do it so he might as well not even try and so he actually CAN'T do it. So he falls on the floor and cries.

We have been parenting as though he is just being difficult.

He is not yet old enough to have learned the coping mechanisms he needs to just do it anyway.

The psychiatrist made clear that Owen needs positive reinforcement (aka " you did an amazing job making your bed! Now all you have to do is pick up those toys and you will be all done!" ) way more than the average child. He WANTS to please, he wants to do good but he really feels like he is incapable of doing so.

Obviously he has some serious self-esteem issues but the psychiatrist told us that is really common in kids with anxiety & ADHD tendencies. Every time he does something wrong it just confirms for him that he can't do anything right.

But it is EXACTLY like me. I hate that I've managed to pass that on to my kids. Not cool. Sometimes I find it frightening just how much of us is determined by genetics.

The psychiatrist also talked about Owen's sensory issues - everything from hating tags in his clothing to chewing on his shirt to the inability to actually be quiet. He essentially said that Owen definitely has a lot of obstacles to overcome but with the right parenting and teaching he will do just fine.

He is referring him to get learning disorder testing just to be on the safe side but other than that basically told us to keep an eye on him and if things get worse we will revisit an actual diagnosis.

All in all Doug and I were very encouraged. We know Owen is a genuinely good kid and it is always nice to have a professional confirm that!
Email Post
Labels: ADHD assessment being a mother my kids Owen Parenting psychiatrist Sensory Integration Disorder