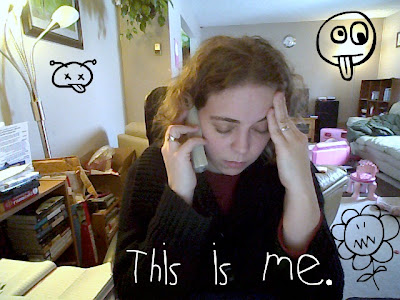 Isn't that a beautiful picture?

I made it for you all while I was talking to Aiden's counsellor a few minutes ago. Actually she is Owen's counsellor too.  Her name is Marla and she is wonderful.

She is really more than a counsellor... she specializes in working with Autistic kids and their families and she keeps me sane. She advocates on our behalf too.

Which is why I was talking to her.

For several weeks now we have had to take Aiden a pill every day at lunchtime. The psychiatrist suggested it but the pediatrician hasn't sent in the "sure the school can give Aiden his pill at lunch" form so we have to take it to him each day.

Today when I was there I was pulled aside by a few different people.

First Aiden's teacher told me Aiden is doing better now that he is allowed to have a pillow and blanket at school. We had a meeting last week with the teacher, the special education coordinator, the Occupational Therapist and our beloved counsellor and in that meeting they managed to convince the school that having a place for Aiden to go IN the classroom to calm down is a really good idea.

So now Aiden has a pillow and blanket and a little corner that he chose. He also has headphones and a little ipod thingy to listen to some music.

It has helped him a LOT.

I can't say I am terribly surprised that it helps him... it has been suggested dozens of times since Aiden started school years ago. But I am thrilled that it is finally being put into practice.

The second person who talked to me was the music teacher. Our music teacher is brilliant. Not only is he a gifted musician but he is phenomenal with the kids. He is creative and fun and an all around great guy.

All three of my children claim to love him.

Aiden has always had trouble in music classes- they are just unstructured and unpredictable enough to throw him off.

But Owen... he has always done really well. Until this year. Our music teacher is having a lot of trouble with him.

And none of us can figure out why.

The third person to talk to me was the special education director who also happens to be the vice principal of the school.

We talked for a long time about both of the boys - Owen is having a lot of trouble in school and it has actually seems to be getting worse, not better. But the big surprise was that our official diagnosis that we got from the pediatrician a couple years ago... isn't "official" enough. And apparently the Occupational Therapist's report and all the other assessments that have been done over the years don't count either.

I swear if it isn't one thing it is another.

Now I realize that special ed lady and the teacher have no control over this and it is not their fault. I have said it before and I will say it again- we love our school.

But I still think this is stupid. Especially since the doctor told us he sent an official diagnosis write up to the school on our behalf.

Unfortunately that doctor has since retired so we have no way of figuring out if he actually did or not. Sigh.

Which brings me back to my phone call with Marla the counsellor. She is going to contact the psychiatrist and see if he will write up an official enough looking diagnosis to please the powers-that-be.

What. A. Day.
Email Post
Labels: Aiden Autism being a mother Parenting school