Oh ya, I was super awesome cool.

I drove my mom and step-dad so crazy saying it that they fashioned themselves cardboard beaks and wore them around for awhile.

I don't know if their methodology successfully got me to stop saying the word... but it certainly has stuck in my memory. After all that was almost 25 years ago.

Anyway I am officially being paid back for any annoying words I ever said repeatedly in my youth.

I have heard the word "ownage" 70 kazillion times already today and I hate it.

There is nothing new under the sun. 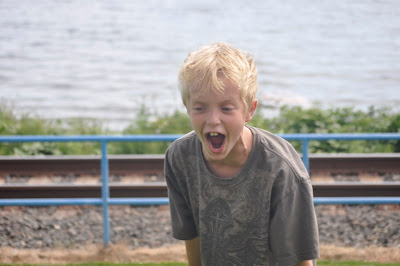 momsmusings said…
The word in our house is "wow" and it isn't the word so much as the sarcasm that goes with it...we have banished it from our house - somewhat unsuccesfully!!
10:28 pm

I also wanted to invite you to enter the iTunes Gift Card Giveaway. It's open to Canadians only. I was late posting it due to technical difficulties (and we went camping etc.) and now it is ending in 3 days and I just posted it today. I don't even have an entry yet. Eeek. So you could be first. You're one of a handful of Canadians I know online :) LOL.

Patricia Ward said…
I've never heard the word "ownage" before - I remember the "beak" phase very well, however! The beaks we made did seem to work actually - I think they just demonstrated the actual meaning of the word, so using it became meaningless. Funny memory!
8:47 pm

Unknown said…
Hmm. I must not be hanging with the cool kids. i've never heard either words.

If the parents start over saying 'ownage' like it's cool, it will suddenly become very uncool.