This afternoon my son Aiden performed in the annual Kindergarten Circus! It was incredibly adorable. All the kids did awesome and it was a lot of fun to watch.

I was immensely relieved that Aiden actually DID his part... it took some convincing but he actually got up on stage. I was so proud. He did have some stage fright but he managed to get through his two performances... with help from the director (his teacher) of course. 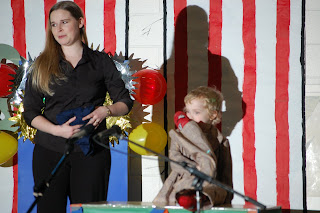 This is Aiden being "Rubber Man"... he is tying a knot in his "legs" and putting them up by his ears... 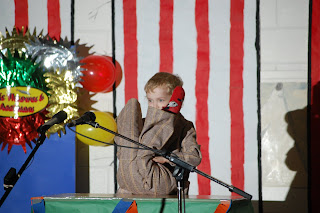 In Aiden's second act he was the "Knife Thrower". Here he is walking with his "lovely assistant". I thought she was especially cute with her costume on backwards! 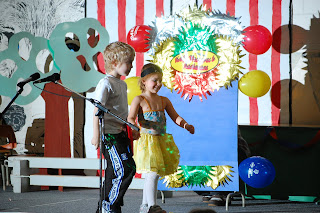 Don't worry, the knives are just cardboard... there was a stage hand popping balloons behind the screen. It was funny. 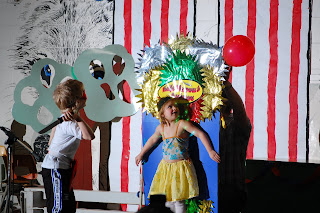 Here Aiden is untying his lovely assistant... well, pretending to untie her since she wasn't actually tied to anything. 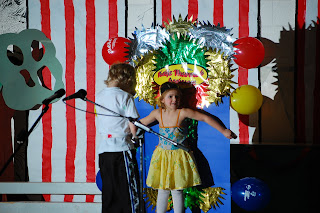 There were lots of different acts and I thought all the kids did VERY well. Owen and Olivia behaved remarkably well during the performance which was a big relief.
Email Post

Im happy that Aiden is slowly starting to overcome his stage fright. I saw a video from youtube entitled Aiden with stage fright (don't know if he's the same boy) but I actually enjoyed watching his video over and over again.I enjoy it so much that I am planning to include his video next week. I write artciles about stage fright in my blogs with hope to help the others overcome their fear. looking at Aiden's pictures is such a relief. It would help as well if you will provide positive affirtmations to him before his performance starts. (you can read more at stagefrighthelp.com) Your sone is so adorable!
11:27 pm

Unknown said…
Sooooo cute! How much fun that must have been. I'm so glad Aiden enjoyed it too! And that you others behaved. Isn't it a relief when they do what you want?
12:10 am

Qtpies7 said…
That is hysterical! Why didn't hte teacher have the girl turn her outfit around?? Her parents must have been a little steamed.

I don't think it is too late to buy a wrap. Especially if you want more children. I got mine used for pretty cheap, but it is still inexpensive at Target.com, it is The Ultimate Baby Wrap.
8:50 am