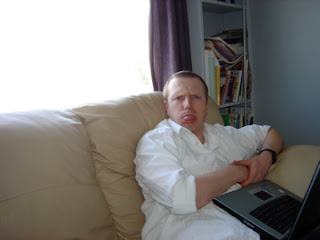 Today is my incredible husband's birthday. Happy birthday my love.
Isn't he handsome :)

Top 10 reasons why I love my husband:

1. He loves me and he shows me he loves me. Even when I am driving him crazy.
2. He loves our kids and is wonderful with them. Even when they are driving him crazy.
3. He is reliable and secure. Even when he would rather run away and join the circus.
4. He keeps me sane. No matter how illogical I seem to be.
5. He cooks me fabulous gourmet meals almost every day. Really. He does. I'm not lying.
6. He makes me laugh. He is really very funny.
7. I feel safer with him than anywhere else in the entire world.
8. He buys me flowers for no reason. And treats like ice cream or chocolate bars.
9. He helps me when I ask him too. And sometimes even before I ask him to.
10. He loves God and tries to be more like Jesus everyday. Even when he would rather just throw in the towel on this whole Christianity business and quit being a pastor and start telling church members off.

Not to mention that he is just so darn cute.

When we were newlyweds of about a month or so we had decided that we would take turns doing the dishes. This worked ok for about the first 3 days. Both of us REALLY hate doing dishes. (I love my dishwasher). So one day it was Doug's turn to do the dishes and he didn't do them. I decided that I shouldn't have to tell him to do the dishes he should just know that and do it on his own. If he really loved me he would do the dishes without me asking him to. So this went on for a few days. Him ignoring the dishes and me not saying anything but getting more and more frustrated. Eventually we were eating off lids and out of pots and I was about to go crazy. He would ask me what was wrong and I would say "nothing". Because I knew that if he really loved me he would KNOW what was wrong. Eventually he said something along the lines of "wow, we sure have a lot of dishes to do" and smiled. And I exploded. World war 3 had just begun in our tiny kitchen in Regina. I yelled and screamed and ranted and slammed the door and told him just how stupid he was in no uncertain terms. When he could finally get a word in he said "well, why didn't you just remind me it was my turn to do the dishes?". Then I exploded with renewed force about how if he really loved me I wouldn't have to act like his mother etc etc etc. The poor man was completely baffled that I was so upset over dishes of all things. By this time I had begun LOUDLY doing the dishes and he feared for his well being. I'm pretty sure he thought I was going to chuck a few of those dishes at him any minute. But my husband is calm. I am a raging sea of torrential emotions and my husband is calm. Eventually I realized that I was the only one freaking out and I returned to a somewhat sane state of being and we began talking through things. Several hours later he said "you know, if I ask you what is wrong and you say nothing you are lying." At this point I wanted to freak out again and I realized anew the downside of being married to a theology graduate. But I also realized he was right. He said "You don't have to tell me what is wrong if you don't want to. But I am not a mind reader and so if you say everything is fine I am going to believe you. And you can't be mad at me for that. You can say you don't want to talk about it. You can say "You're an idiot" but if you say "Nothing" then that is you lying. And me forgetting to do the dishes has nothing to do with how much I love you. And no one can read your mind and no matter how much I love you I still won't be able to read your mind.". So we made a pact. I agreed that my saying "nothing" was actually lying and he agreed not to get upset when I reminded him to do things... as long as I reminded him nicely.

This has worked remarkably well.

I love my husband. He is a good man and a keeper.
Email Post

Jinny said…
First of all...hahahahahahahahahahahahaha. That was the best story in the world. I can't imagine you guys having a fight like that (cough, cough). And Happy Birthday to Doug who is definately a keeper. Don't you just love boys who cook? Everyone always curses me when I tell them that Colin cooks everyday and I hate cooking, so I'm glad to have a friend that won't curse me for having such a husband. We're spoiled, aren't we. :o)
12:15 pm

Amanda Franks said…
Happy Birthday Doug! I agree he's pretty great and it sounds like it runs in the family! Nick helped Selinger with some shows at Cedarview this weekend and was billeted with Doug's folks! He had a super great time!
7:46 pm

debrowns said…
Thanks for the story Tara ... I loved it, especially because its true. Too bad our marriage is perfect so we've never had this problem ... yeah right!
9:24 am