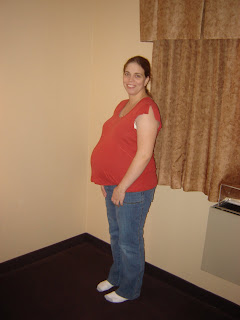 Yesterday my husband took me into Saskatoon (2.5 hours away) for a series of appointments I had in regards to this pregnancy. First I spent several hours with the gestational diabetes doctor and her associates. During this fascinating 2 hour appointment they informed me of all the details of my newfound diabetes. For those of you who don't know this is a form of diabetes that shows up just during pregnancy and is supposed to disappear upon delivery of the baby. This is my first experience with it and I must say I am not enjoying it. Basically it means I have to excercise when I don't want to and eat things I don't like and ignore all my cravings all in the hope that I won't further screw up my health or the baby's. Honestly though, the possibility of damaging your child's health is a fabulous motivator. I have a newfound empathy for all the multitudes of people who have to live with this disease all the time. It's really miserable. And expensive. But enough of that.

Since moving to Saskatchewan I have had a rather difficult time transitioning into the small town system of health care. In Hamilton I had access to numerous specialists and a very thorough medical team.... we simply do not have the resources to support such things in Northern Saskatchewan. I was told in one of my many appointments yesterday (this one having to do with my thyroid difficulties) that we don't even have an endocrinologist in this province (that is a doctor who specializes in thyroid function amongst other things). This disturbed me. How can there be so few specialists available in Canada that Saskatchewan can't even lure one to our fair province? It did clear up why my family doctor has thus far failed to refer me to one however. Apparantly she is not incompetent or ignoring me but in fact has no other options. In any case the doctor who is now taking over my case in this area sent me for a multitude of blood tests yesterday and then in a very sweet voice said "if your thyroid isn't working properly during pregnancy it can affect the future IQ of your child". Then she smiled. I felt a surge of panic well up inside me. Clearly this young, but very competent, doctor does not have children of her own yet. If she had she would have realized the fear this would strike in me. The idea that the lack of health care practitioners in my province could affect the IQ of my baby is a sobering thought for me. Not that I can do a thing about it, it just sucks.

After this enlightening morning I moved on to an ultrasound appointment where it was confirmed to me that my baby is in entirely the wrong position but healthy as can be. I carried on to meet with my obstetrician who informed me that I am likely heading for a c-section and he doesn't think I'll go into labour this week. I am at risk for early labour and the diabetes thing increases that risk. I am only 33 weeks pregnant and 40 weeks is the normal time to deliver. If I were to go into labour early the baby is in the wrong position and without getting into gross details it could make a real mess of things. On the up-side baby is ok right now. Anyway, the point is that my day was just filled with not-so-encouraging doctor's appointments.

So in my disappointment I feel compelled to remind myself that God is still in control. He can work around an inadequate health care system. He doesn't need anything from me that I am unable to give. My child's life is in His very capable hands and I would do well to stop worrying about things I can't control. This, of course, is much harder to do than to say. So I will continue to leave my... struggles... in God's hands and determine to accept whatever it is He has planned for me- even if it is not my ideal. Truthfully I would really like it if God were more like a genie in the bottle... rub the side and get your wish. A God at my command. Or that I could manipulate Him into doing MY will by fulfilling a list of requirements. Read your bible 20 minutes per day, pray 50 times a day, memorize 16 verses from the bible and God will grant your request. The unfortunate thing is that God is not my magical santa claus or a dictator to be appeased. But that is also the fabulous thing about God. He can't be controlled by me or anyone else. He is GOD. He's way bigger than me and He is way smarter than me and already knows the end of the story. Whether I realize it or not I don't want a God made in my own image, I want an all-powerful, infinately loving God who is miraculously willing to have relationship with me and listen to my endless whinning and needless worrying. So again, I shall trust my children (even the unborn one) to my God who is much more able to care for their every need than I am. And I will thank Him for the priveledge of being my kid's mom.
Email Post
Labels: gestational diabetes God health care pregnancy Saskatchewan Saskatoon specialists thyroid

PC said…
Right on sister. As another who has had a bit of a rough time today (not compared to you with things threatening your unborn child, but still very hard) I do need to remind myself of that, and it's so nice to hear it from a friend who is a part of that misterious capital "C" church that God has given us.
3:05 pm

Katherine said…
Be encouraged for God is with you. I am also praying for you and your baby, and of course for the rest of your family.